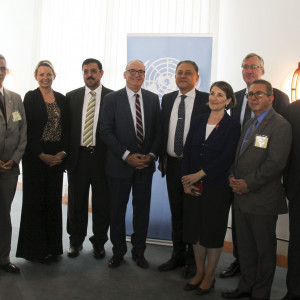 On Thursday, 29 November 2018, the United Nations Information Centre for Australia, New Zealand and the South Pacific, in partnership with the General Delegation of Palestine to Australia, New Zealand and the Pacific, the Federal Parliamentary Friends of Palestine and the Council of Arab Ambassadors, hosted a reception to observe the UN International Day of Solidarity with the Palestinian People at Australian Parliament House in Canberra.

Among the attendees were federal MPs and senators, members of the international and Arab diplomatic corps, representatives of local and national advocacy and civil society groups, and Palestinian community members. This year’s theme was Palestinian refugees and the important work of UNRWA, with a particular focus on the Agency’s current financial crisis and the consequent impact this has had on the well-being of and opportunities for the vulnerable people it serves. Speakers included Co-Chairs of the Parliamentary Friends of Palestine the Hon Sussan Ley MP and Ms Maria Vamvakinou MP, UNHCR Regional Representative Mr Thomas Albrecht, Dean of the Council of Arab Ambassadors H.E. Mr Mohamed Khairat, and Head of the General Delegation of Palestine H.E. Mr Izzat Abdulhadi. The event also featured a special recorded message from UNRWA’s Commissioner-General Mr Pierre Krähenbühl.