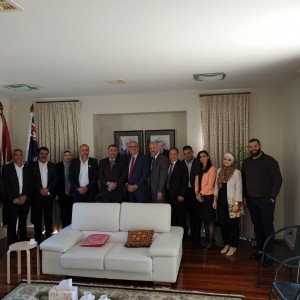 On Tuesday, 26 March, Ambassador Abdulhadi and the Delegation’s staff received a visiting member of the Lebanese Parliament, Mr Othman Alameddine MP, who was accompanied by a delegation representing the Lebanese Future Movement in Australia. Ambassador Abdulhadi thanked Mr Alameddine for the Movement’s continued support for Palestine, and shone a light on the good relations between the Palestinian Delegation and the Lebanese community in Australia. Mr Alameddine expressed his gratitude to the Ambassador for his hospitality, and reaffirmed the position of both the Future Movement and the Lebanese government in support of the Palestinian people’s immutable rights to self-determination and return.