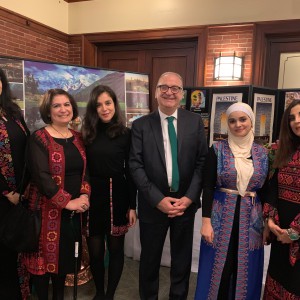 On Friday, 31 May, the Palestinian Delegation, represented by the Ambassador and staff, participated in the OIC’s annual iftar dinner at Old Parliament House with a food stall that included some traditional favourites.

This iftar was the result of a collaborative effort (co-ordinated by the OIC Working Group under the Egyptian Embassy’s direction) between the twenty-five diplomatic missions that comprise the OIC’s Canberra chapter. The event’s success was reflected in its turnout, which was sizeable, diverse, and included many state and federal MPs, religious and community leaders, DFAT officials, academics and diplomats.

The evening was eloquently MC’d by Counsellor Ms Suheir Gedeon from the Palestinian Delegation and Deputy Head of Mission Ms Aliaa Abouelnaga from the Egyptian Embassy. They highlighted the special meaning of Ramadan as a time for deep and sustained reflection, charitable deeds and appreciating the value of family. Speeches were made by the Ambassador of Indonesia and Chairman of the OIC Heads of Mission Group, HE Mr Kristiarto Legowo, and DFAT Deputy Secretary - International Security, Humanitarian and Consular Group, Mr Tony Sheehan, who represented both Prime Minister Morrison and Foreign Minister Payne at the event. In his address, Mr Sheehan observed that “Ramadan is a wonderful time to join family and friends in celebration of our common humanity. The practice of breaking fast together across different communities and religions develops new bonds and understandings”.