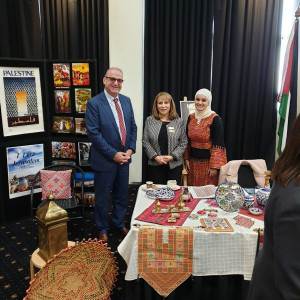 The Palestinian embassy would like to sincerely thank the Women’s International Club (WIC) in Canberra, and Dr Mayada Kayali in particular, for organizing an extraordinary function at the Hellenic Club on June 26. The function included the showcasing of the cultural heritage of six countries, including the State of Palestine. The Palestinian stall included select pieces of Palestinian embroidery, handicraft and fine art, as well as a photographic display of the main tourist sites in Palestine. In addition to the stall, a video promoting tourism in Palestine and various aspects of Palestinian folklore was screened.

In her introductory address, Dr Kayali, an Australian of Palestinian background, noted that “Palestine is an ancient land whose people still hold many of its ancient traditions and beliefs. Indeed, the culture of Palestine today bears the influence of many of the ancient and modern civilisations, cultures and religions that existed on the land”.

The WIC’s members warmly welcomed Palestine’s contribution, and expressed their appreciation to the embassy’s staff for taking the time to participate in the function.