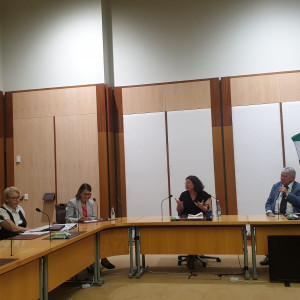 Ambassador Abdulhadi participated on February 22 in an important panel organized by the Parliamentary Friends of Palestine in the Federal Parliament.

The objective of the Panel entitled “Briefing: Anti-Semitism, criticism of Israel and Palestinian justice” was to launch a statement co-written by the Australia Palestine Advocacy Network (APAN) and the Australian Jewish democratic Society (AJDS). The statement differentiates between anti-Semitism, as a part of discrimination, and criticism to Israel, which is a legitimate process and discourse taking into consideration the continuous Israeli occupation of Palestine.

The panel was attended by a number of MPs.