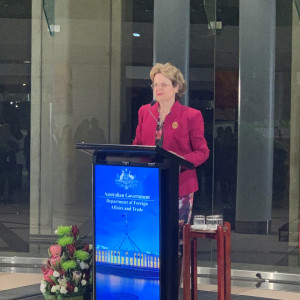 On May 6, Ambassador Abdulhadi participated in the DFAT Annual Ramadan reception at the DFAT premises.

The reception was attended by Muslim Ambassadors, MPs, Australian officials, civil society representatives among others.

The speech acknowledged and appreciated the role of the Muslim community in Australia and their contribution to Multilateralism in Australia.