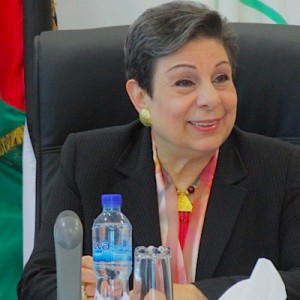 In his diatribe against Iran, Netanyahu accused it of being a “dark theocracy,” a dangerous nuclear threat and a source of violence and terrorism; ironically, he is pressing for Israel to be recognized as a Jewish state, and with his extremist government, he is insisting on turning it into an ideological theocratic state. Israel is an unaccountable nuclear power, and as a matter of policy, it continues to use violence and terror against a captive Palestinian population. With its deliberate assaults on Al-Haram Al-Sharif and Palestinian worshipers, Israel is also provoking a religious confrontation and a holy war.

True to form, Netanyahu blames the victim and disingenuously claims to support unconditional negotiations, while simultaneously conditioning peace on the recognition of the “Jewishness of the state” and the demilitarization of Palestine; abiding by international law and honoring signed agreements are seen as pre-conditions. On the ground, Netanyahu has used the “negotiations process” for further unilateralism and as an opportunity to destroy the prospects for peace; such actions and policies constitute real “incitement” and “provocation” and feed extremism and violence.

Netanyahu conveniently omitted the military occupation of Palestine and the enslavement of an entire nation, as well as the theft of Palestinian land and resources. When it comes to Israeli violations and culpability, Netanyahu once again engages in an act of grand deception; he is not only deflecting accountability and criticism, but also destroying the imperatives of peace.”