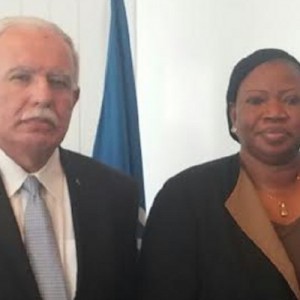 HAGUE, August 3, 2015 - Foreign Affairs Minister, Dr.Riyad Al-Malki Monday, following formal instructions of President Mahmoud Abbas, handed over the file prepared on settlers’ violence against the Palestinian people, to the Prosecutor of the International Criminal Court, Fatou Bensouda, at the International Criminal Court (ICC) headquarters in Hague.
Al-Malki met with the ICC prosecutor in the wake of settlers’ arson attack that targeted two homes in Nablus’ village of Duma and led to the killing of toddler Ali Dawabsheh and the critical injury of his entire family, in order to follow up with the prosecutor’s office procedures regarding the preliminary examinations into the situation in the Occupied Palestinian Territory.
The minister further addressed a previous file that was submitted to the prosecutor’s office in June 25, 2015, on crimes committed by Israel in the occupied Palestinian territories since June 2014, including last summer's military offensive on the Gaza Strip, ongoing illegal settlement activity, and the issue of Palestinian prisoners jailed in Israel.
Al-Malki briefed Bensouda on the latest grave developments in the occupied Palestinian territory, including the Duma crime, and the ‘cold-blooded’ killing of teenager Laith al-Khaldi, who was shot from behind at Atara check point near Ramallah and later succumbed to his critical wounds.
He stressed that the continuation of the Israeli occupation and its policies, including its settlement expansion policy, along with the impunity it grants to settlers, encourages such crimes.
He called on the ICC to speed up investigations into the situation in the occupied Palestinian Territory, particularly in light of the continued ‘inhumane war crimes’ committed by the occupation against the Palestinian people. He further called on the ICC to end the policy of granting impunity to perpetrators of such crimes and to ensure accountability for perpetrators of such crimes.