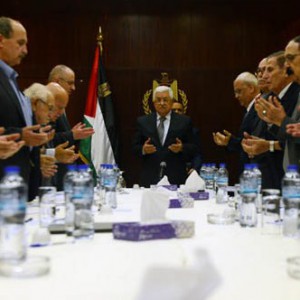 The PLO Executive Committee also highlighted the importance of being aware of the Israeli government plans to dragging the situation to violence to use it as a justification to get out of its international isolation and obligations. As well as the importance of a Palestinian unity around the political victories that were achieved within the overall strategy of a popular peaceful resistance movement.

The Executive Committee also salutes the masses of Palestinians whom confronting the occupation and its continuing aggression in Jerusalem and all over the rest of the Occupied State of Palestine.

The Executive Committee also asked all Palestinian people to unite their ranks, renounce their differences, and stand united for a national act of self-defense. In addition to offering its condolences to the families of the martyrs, and wishes a fast recovery to the wounded heroes.

The Executive Committee also discussed the deteriorating situation of Palestinian prisoners, as a result of the Israeli practices that is conflicting to the international law. In addition to stressing that the issue of prisoners still remains as a top priority for the Palestinian leadership.

Furthermore, the Executive Committee of the Palestinian Liberation Organization called the Secretary General of United Nations Ban Ki-moon to take all responsible actions concerning to President Mahmoud Abbas request of providing international protection for the Palestinian people in occupied Palestine (West Bank, including Jerusalem, and the Gaza Strip), and the implementation of the Geneva Conventions of 1949, specifically the Fourth Geneva Convention of 1949, and to induce the Israeli occupation to respect international law and international humanitarian law.

The Executive Committee also called upon all states who haven’t recognized the State of Palestine on the borders of 4 June 1967 and with East Jerusalem as its capital, to promptly do so, particularly the states members of the European Union. At the same time, the PLO applauds the EU plans concerning labeling of Israeli settlement products.

The Executive Committee also stressed on the continuing efforts to end the Palestinian division, and achieving national unity by forming a national unity government. In addition to taking quick steps towards general elections, stressing the importance of achieving a national front against the Israeli aggression, and its plans aimed at destroying the Two-State solution, and establishing the concept of one apartheid state all over historic Palestine, besides the continuing separation of the Gaza Strip from the rest of the State of Palestine. The Committee also confirmed taking quick steps towards holding the regular meeting of the Palestine National Council, with the participation of all Palestinian factions and powers including Hamas and Al-Jihad.

The Executive Committee also announced its full support for the Palestinian strategy announced by President Mahmoud Abbas in front of the 70 United Nations General Assembly which was hold on 30/9/2015, including the implementation of the decisions of the Palestinian Central Council, to define security relations, political and economic relations with the occupying power (Israel), as a result of the constant evading of its obligations in singed agreements. Highlighting that the PNA specific functionality is to transfer the Palestinian people from occupation to independence, and rejecting all Israeli schemes aimed to forcing the concept of a State with two systems (apartheid), and the transitional solutions, or the so-called State with temporary borders, and rejecting all attempts to imposing the continues status quo of the separation of Gaza from the rest of the occupied Palestine territory, through the suspicious offers of a long-term ceasefire or open paths negotiations under the control of the occupying power (Israel). Also, it emphasized on the impracticality of a Palestinian State without Gaza neither a State in Gaza, and that the international community determined the borders of the Palestinian State on the lines of 4 June 1967 and East Jerusalem as capital.

Finally, the Executive Committee have assigned its Political Committee to develop the needed plans in order to implement all the points raised by the speech of President Mahmoud Abbas before the UN General Assembly.