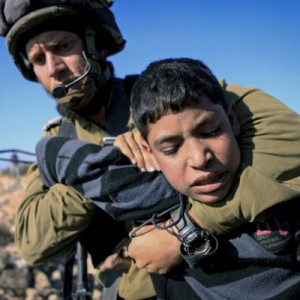 Nearly 20 House Democrats have urged Secretary of State John Kerry to stress the rights of Palestinian children during Washington’s relations with Tel Aviv.

“Israel’s military detention system targeting children is an anomaly in the world,” according to the letter co-signed by 19 lawmakers, and released by Rep. Betty McCollum. “Secretary Kerry, we urge the Department of State to elevate the human rights of Palestinian children to a priority status in our bilateral relations with the government of Israel.”

“Palestinian children should be treated exactly the same as Israeli or American children, without the fear that one day soldiers will arrest them, beat them, and lock them away in prison,” she said in a statement released earlier this week.

A UNICEF report on the treatment of children in Israeli custody that was released in 2013 found that each year roughly 700 Palestinian children between the ages of 12 and 17, mostly boys, are “arrested, interrogated and detained by Israeli army, police and security agents”.

It noted that the majority of children who are prosecuted in Israel’s military courts are charged with throwing stones. The maximum penalty for the charge is 10 years imprisonment for children aged 14-15 years old if the object is thrown at a person or property.

But if the target is a moving vehicle, the charge skyrockets to 20 years imprisonment, according to the report.

“Ill-treatment of Palestinian children in the Israeli military detention system appears to be widespread, systematic and institutionalized,” the report said. “These practices are in violation of international law that protects children against ill-treatment when in contact with law enforcement, military and judicial institutions.”

The lawmakers who wrote to Kerry this week said they “fully expect the State Department to address the status of Israel’s military detention system’s treatment of Palestinian children in its annual human rights report.”

This year’s report, which was released Thursday for 2014, said Israel's human rights violations in the West Bank and Gaza included "excessive use of force against civilians," and "abuse of Palestinian detainees, particularly during arrest and interrogation."

It noted that rights groups "claimed Israeli security services continued to abuse, and in some cases torture, to coerce confessions from minors who they frequently arrested on suspicion of stone-throwing."