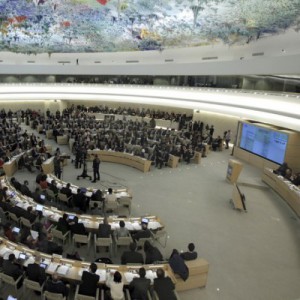 The Ministry of Foreign Affairs of the State of Palestine welcomed the adoption today by the UN Human Rights Council in Geneva of the resolution on “Ensuring accountability and justice for all violations of international law in the Occupied Palestinian Territory, including East Jerusalem” by an overwhelming majority of Member States.The resolution welcomed the report by the UN Commission of Inquiry on the Gaza conflict which found that serious human rights violations and grave breaches of international humanitarian law were committed in the context of Israeli military operations in the summer of 2014, including possible war crimes. The resolution called upon all duty bearers and United Nations bodies to pursue the implementation of all the recommendations contained in the report.


The Ministry of Foreign Affairs stresses that the adoption of this resolution reflects a strong support by the international community at large for accountability. As Foreign Minister Riad Malki has stated, “there is no path to justice and peace without accountability”. The resolution emphasized the need to ensure that all those responsible for violations of international humanitarian law and international human rights law are held to account, through appropriate fair and independent domestic or international criminal justice mechanisms, as well as to ensure the right of all victims to an effective remedy, including through reparations. “We will not accept that the repeated crimes against our people go unpunished”, stated Malki. In its criminal assault against the Gaza Strip last summer, Israel killed over 2200 Palestinians, including over 550 children, 80 of whom were 3 years old or less. Entire families were annihilated. “For them, for the family of Mohammed Abu Khdeir and so many other Palestinian families, for our people still under occupation and blockade, and deprived of their inalienable rights, and to prevent the recurrence of such crimes, we have a duty to end impunity”, added the Minister. The resolution calls in this regard upon the parties concerned to cooperate fully with the preliminary examination of the International Criminal Court and with any subsequent investigation that may be opened. The resolution also tackles third parties' obligation to respect and ensure respect for international humanitarian law, including through penal sanctions, and to promote compliance with human rights obligations.


The resolution stresses the urgency of achieving without delay an end to the Israeli occupation that began in 1967. The prolonged belligerent military occupation is the root cause of the conflict and the primary factor leading to violations of international law. The Ministry of Foreign Affairs, while underlining that the COI report tries to artificially strike a balance between the violations committed by the occupying Power and the occupied people, insisted however that the State of Palestine will shoulder its responsibilities to ensure compliance with international law. Guided by the same spirit that led it to seek the establishment of the UN Commission of Inquiry and presenting this follow-up resolution, the State of Palestine shall pursue with consistency and resolve, through every possible avenue, full respect for international humanitarian law and human rights law by all and for all.


The resolution insists on the need to ensure implementation of the recommendations contained in this report and in reports by other fact finding missions and Special Rapporteurs. The resolution deplores the non-cooperation by Israel with the United Nations Independent Commission of Inquiry on the 2014 Gaza Conflict and the refusal to grant access to, and cooperate with, international human rights bodies seeking to investigate the violations of international law in the Occupied Palestinian Territory, including East Jerusalem. Foreign Minister Malki considered that “the refusal by Israel, the occupying Power, to grant such access is an implicit recognition of the commission of crimes of concern to the international community as a whole and we call on states and UN bodies to take the required steps in this regard”.


The Minister thanked the countries which voted in favour of the resolution for their principled stance to uphold universal values.


41 countries voted in favour of the resolution, 5 abstained and 1 voted against.