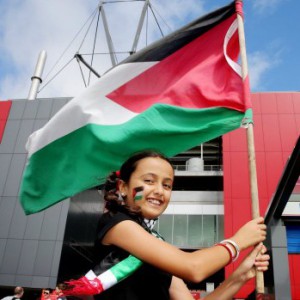 "It's time for Labor to show moral fortitude and display political foresight by recognising the Palestinian state". Maria Vamvakinou

In a few days, the ALP's national conference will debate whether to recognise the state of Palestine. As a member of the federal Labor caucus and co-convener of the Australian Parliamentary Friends of Palestine, I urge my ALP colleagues and conference delegates to support calls for Labor in government to recognise Palestinian statehood.

I've always been a supporter of the Palestinian cause, but it wasn't until I visited Palestine and Israel in 2011 that I came to realise the extent to which the longest occupation in modern history impinges on the everyday lives of millions of Palestinians.

A combination of overt military force, alteration of the demographic realities through Israeli settlements in the West Bank and East Jerusalem, and a systemic culture of rejections at the negotiations, has, over decades, contributed to a malaise of desolation, frustration and helplessness among the Palestinians.

I also saw how Israel's wall criss-crosses through Palestinian lands, lives and communities by dividing them from their livelihoods, their families and their futures. Most startling and memorable was our visit to the village of Bil'in in central West Bank where the wall separates the locals from their farmlands. Despite an Israeli court declared the wall illegal, the Israeli government has refused to remove it. So the locals march in protest every Friday. As we marched with Palestinians we were immediately confronted with the Israeli military response: tear gas and rubber bullets.

This is a weekly ritual of civil disobedience and deterrence. It was the first time that I experienced the effects of tear gas. Yet young and old Palestinians continued to march in defiance. I realised how dangerous, entrenched and precarious the situation was. It doesn't take much to realise that as the prospects for peace and wellbeing flee, dissolution and despair morph into anger and fury and a recipe for confrontation and violence.

Regrettably, since my visit the situation has deteriorated. Israel's policies on the ground have deepened the Palestinians' misery, making a two-state solution much harder to reach. Uri Savir​, a former Knesset member and Israel's chief negotiator at the Oslo Accords, warns that Israel's Prime Minister, Benjamin Netanyahu, views Israeli settlements of the West Bank and East Jerusalem, and their subsequent expansion, as an instrument in preventing a Palestinian state.

When it comes to exercising foreign policy, we in the ALP like to pride ourselves as being responsible international moral actors – as exercising what Gareth Evans once described as "good international citizenship". Australia has a proud record in the United Nations, which we were instrumental in creating after World War II with our own Doc Evatt (Dr Herbert V. Evatt) playing a leading role in the creation of Israel and the drafting of the UN Universal Declaration of Human Rights.

Since then, we have played a major role in peacemaking around the world. We have provided more than 66,000 peacekeepers to more than 73 multilateral operations, including our major contribution to the UN Transitional Authority that brought peace to Cambodia. We are among the top 10 contributors to the World Food Program, the World Health Organisation, UNICEF, the UN Development Program and the Human Rights Commission.

However, when it comes to Palestine and Israel our record at the UN seems to be misguided by politics and expediency. Ever since we voted for the partitioning of Palestine in 1947, Australia has consistently voted against Palestine in the UN. In October 2011, Australia was one of the 14 countries that voted against admitting Palestine to UNESCO. Almost a year later – under Labor – Australia abstained from according Palestine non-Member Observer State status in the UN, rather than join most of the world (138 countries) that voted for the Palestinian statehood bid. This is in stark contrast with many Western countries that share Australia's democratic values and its history of support for Israel – countries such as France, Germany, Ireland, Italy, Norway and the Netherlands. Even Britain's House of Commons passed a motion in October last year by an overwhelming 274 votes to 12 that "the government should recognise the state of Palestine alongside the state of Israel".

Over and over again, Australia was one of the eight countries that aborted the Palestinian/Arab bid to end the occupation in December last year. Saying that we support a two-state solution is not enough any more. Our passivity is misconstrued as condoning the status quo. And perpetuation of the status quo eschews responsibility.

There are compelling ethical, political, security and community reasons why the ALP should recognise the Palestinian state. It ticks all the boxes for the ALP in forging a responsible, intelligent, pragmatic, engaging, ethically bound policy that serves our community and national interests, while advancing the cause of peace and security in one of the world's most dangerous and volatile regions.
I could not help of being reminded of what Ramzi Saleh​, the goalkeeper of the Palestinian soccer team, said this year when Australia hosted them as part of the Asian Football Confederation Cup: "Isn't it ironic that the national anthem of Palestine was played in Australia almost two weeks after Australia voted against us at the UN?"

So, as the Ben Chifley Labor government recognised the state of Israel in 1947, the time has also come for the ALP to show moral fortitude and display political foresight by recognising the Palestinian state.

Maria Vamvakinou is the federal MP for Calwell and co-convener of the Australian Parliamentary Friends of Palestine, which led a parliamentary delegation to Israel and Palestine in April 2011.