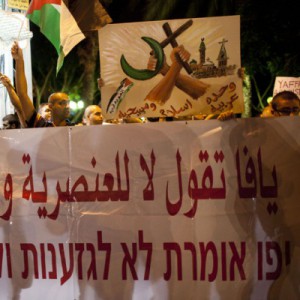 Israeli Prime Minister Benjamin Netanyahu delivered a public address on January 2nd 2016 that has been widely condemned by Arab-Israeli political leaders and human rights groups as incitement against the country’s Palestinian minority. This address and its inflammatory comments are seen as the latest instalment in the Prime Minister’s racist and discriminatory approach to minority rights, and as a chapter in the much longer history of Israel’s institutionalised discrimination against its Palestinian citizens.

Prime Minister Netanyahu’s address was delivered in response to a shooting attack on January 1st carried out by a Palestinian-Israeli man Nashat Melhem. Melhem opened fire on a bar in Tel Aviv killing two Israelis and injuring seven. An Arab-Israeli taxi driver was subsequently killed by Melhem as he fled the scene of the shooting.

The shooting was immediately condemned by Arab political organisations such as the High Follow-Up Committee and the Joint List Party, and by the local council of Melhem’s hometown, A’ara. The High Follow-Up Committee as the umbrella representative body for Palestinian-Israelis condemned the attack as against the “democratic struggle which the Arab population has chosen”.

Despite clear condemnation from the Palestinian-Israeli community, Netanyahu has taken this opportunity to capitalise upon widespread anti-Palestinian sentiment within Israeli society, demonising the Palestinian minority as collectively responsible for Melhem’s crime.

During his address Netanyahu promised to “…dramatically increase law enforcement services in the Arab sector”, stating that “we will open new police stations, recruit more police officers, and go into all the towns and demand of everyone loyalty to the laws of the state”. These comments were shortly followed by police raids into Palestinian-Israeli homes.

Jafar Farah, director of Israeli Human Rights Group, the Mossawa Center critiqued this approach as failing to address the root causes of violence – “more law enforcement is not the solution” Farah said, “the solution is to deal with core issues from occupation to systematic discrimination”. Farah also suggested that “Netanyahu is using the opportunity to attack the whole [Palestinian] community, as he has done for years”.

Netanyahu’s assertion that he is not “prepared to accept two states of Israel, a state of law for most of its citizens and a state within a state for some of them” ignores the democratic approach to equality that has been adopted by the majority of Palestinian-Israelis. It also ironically touches upon the heart of the problem, in that through its system of discriminatory laws, institutionalised racism and state-led incitement, the Israeli state has created ‘a state within a state’ for its Palestinian citizens – a state where Palestinians are reduced to second-class status, where their rights, needs and problems are ignored.

Israeli policies of exclusion and discrimination, along with its government’s inflammatory statements contribute greatly to the escalation of tensions in the region. The Palestinian Ministry of Foreign Affairs calls upon people of conscience to respond on January 30th. Through acting in solidarity with Palestinian citizens of Israel, the international community can reaffirm its support for inclusive, unconditional democracy and minority rights in the region.

Issued by the General Delegation of Palestine to Australia, New Zealand and the Pacific.