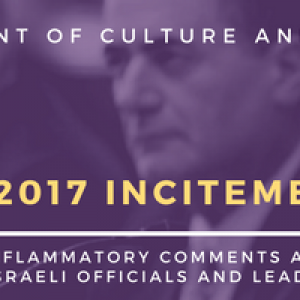 “For us, Tokyo is absolutely the only capital of Japan, and Jerusalem is the capital of State of Israel.” (December 25, 2017)

“The recognition of Jerusalem as the capital of Israel, and the relocation of all embassies to the city, is a landmark in the recognition of the right of the Jewish people to our land, and a milestone on our road to peace - peace for all the residents of Jerusalem, and the whole region.” (December 6, 2017)

Prime Minister Benjamin Netanyahu: “Jerusalem is our capital. Always was, and always will be.” (December 21, 2017)

“It is better for the Palestinians to recognize reality and work for peace, not for radicalization, and to recognize another fact about Jerusalem: not only is it the capital of Israel, but we also maintain freedom of worship in Jerusalem for all religions and we are the only ones who keep this promise in the Middle East.” (December 13, 2017)

Defense Minister Avigdor Lieberman: “[Wadi Ara residents] should understand that they are not wanted here, they are not part of us... [They] have no connection to this country... So I am calling for a boycott of Wadi Ara. Don’t go there and don’t buy there.” (December 10, 2017)

Education Minister and Diaspora Affairs Minister Naftali Bennett: “The Palestinian issue is a fake issue, just like the notion of a Palestinian state is a fake state. It's not a massive and central issue in the international or regional discourse... No one is talking about the Palestinians except for studios in London. It's really not a mainstream issue.” (December 18, 2017)

“No peace settlement can be predicated on dividing up Jerusalem. There will never be peace based on a divided Jerusalem... Jerusalem will remain united under Israeli sovereignty forever; that's a fact.” (December 18, 2017)

Justice Minister Ayelet Shaked: “The registration of the land of Kfar Etzion as the land of the Jewish National Fund is an important step, both symbolically and practically, in order to continue our hold on [the settlements of] Gush Etzion and the Land of Israel.” (December 20, 2017)

“Our goal is, someday, to apply sovereignty [the Occupied West Bank], but I think that if the president at this stage will just move the embassy, it’s good enough for us.” (December 3, 2017)

Jerusalem Affairs Minister Ze'ev Elkin: “It is true that unfortunately [U.S. President Donald] Trump mentioned the two-state solution, but he made reservations by saying that it should be acceptable to both sides, which is a major change in the American approach and the European approach that we heard this week during the prime minister's visit. I personally strongly oppose the establishment of a Palestinian state, and do not think that this is a viable solution.” (December 15, 2017)

Internal Security Minister Gilad Erdan: “Our response to the UN campaign by Abu Mazen [Mahmoud Abbas] and his supporters against the US and Israel will be to strengthen our sovereignty, security, and [settlement] construction in every part of Jerusalem... The Palestinians can threaten and the UN can vote- we will continue to build and strengthen our capital Jerusalem.” (December 21, 2017)

Knesset Speaker Yuli Yoel Edelstein: “Jerusalem is the only capital that the State of Israel has had since gaining independence nearly seventy years ago, and its status is grounded in legislation. (December 17, 2017)

Deputy Foreign Minister Tzipi Hotovely: “We waited 70 years till the world recognized Jerusalem, so we have enough patience to [wait for them] to understand that this [Occupied West Bank] is a part of Israel.” (December 8, 2017)

Israel’s Ambassador to the UN Danny Danon: “No vote or debate will change clear reality. Jerusalem is and has always been the capital of Israel. We will continue along with our allies to fight for the historical truth this time too.” (December 16, 2017)

“The nations of the world must understand, that there will never be peace without Jerusalem as the capital of the State of Israel. That is why, today, I call on all countries to join with our American friends, recognize Jerusalem as our capital and move their embassies as well.” (December 8, 2017)

Former IDF General and Key Israeli Labor Party Figure Amiram Levin: “We were too good in 1967,” said Levin. “If they violate agreements, then next time we’ll throw them over the Jordan River. The Palestinians deserved the occupation, they don’t deserve anything because they didn’t accept the boundaries of division. The problem is that the occupation corrupts, and that is an existential danger to us as a society.” (December 13, 2017)