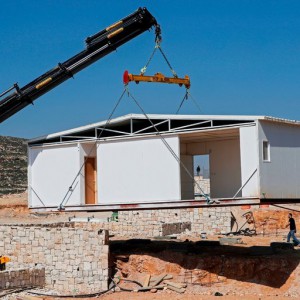 As the state of Israel approaches its 70th anniversary, I am filled with pride as I watch the vulnerable Jewish state of my childhood evolve into the strong and prosperous nation it is today.

As president of the World Jewish Congress, I believe that Israel is central to every Jew’s identity, and I feel it is my second home. Yet today I fear for the future of the nation I love.

True, the Israeli Army is stronger than any other army in the Middle East. And yes, Israel’s economic prowess is world renowned: In China, India and Silicon Valley, Israel’s technology, innovation and entrepreneurship are venerated.

But the Jewish democratic state faces two grave threats that I believe could endanger its very existence.

The first threat is the possible demise of the two-state solution. I am conservative and a Republican, and I have supported the Likud party since the 1980s. But the reality is that 13 million people live between the Jordan River and the Mediterranean Sea. And almost half of them are Palestinian.

To avoid these unacceptable outcomes, the only path forward is the two-state solution.

President Trump and his team are wholly committed to Middle East peace. Arab states such as Egypt, Jordan, Saudi Arabia and the United Arab Emirates are now closer to Israel than they have ever been, and contrary to news media reports, senior Palestinian leaders are, they have personally told me, ready to begin direct negotiations immediately.

But some Israelis and Palestinians are pushing initiatives that threaten to derail this opportunity.

Palestinian incitement and intransigence are destructive. But so, too, are annexation plans, pushed by those on the right, and extensive Jewish settlement-building beyond the separation line. Over the last few years, settlements in the West Bank on land that in any deal is likely to become part of a Palestinian state, have continued to grow and expand. Such blinkered Israeli policies are creating an irreversible one-state reality.

The second, two-prong threat is Israel’s capitulation to religious extremists and the growing disaffection of the Jewish diaspora. Most Jews outside of Israel are not accepted in the eyes of the Israeli ultra-Orthodox, who control ritual life and holy places in the state. Seven million of the eight million Jews living in America, Europe, South America, Africa and Australia are Modern Orthodox, Conservative, Reform or secular. Many of them have come to feel, particularly over the last few years, that the nation that they have supported politically, financially and spiritually is turning its back on them.

By submitting to the pressures exerted by a minority in Israel, the Jewish state is alienating a large segment of the Jewish people. The crisis is especially pronounced among the younger generation, which is predominantly secular. An increasing number of Jewish millennials — particularly in the United States — are distancing themselves from Israel because its policies contradict their values. The results are unsurprising: assimilation, alienation and a severe erosion of the global Jewish community’s affinity for the Jewish homeland.

Over the last decade I have visited Jewish communities in over 40 countries. Members in every one of them expressed to me their concern and anxiety about Israel’s future and its relationship to diaspora Jewry.

Many non-Orthodox Jews, myself included, feel that the spread of state-enforced religiosity in Israel is turning a modern, liberal nation into a semi-theocratic one. A vast majority of Jews around the world do not accept the exclusion of women in certain religious practices, strict conversion laws or the ban of egalitarian prayer at the Western Wall. They are bewildered by the impression that Israel is abandoning the humanistic vision of Theodor Herzl and taking on a character that does not suit its own core values or the spirit of the 21st century.

The leadership of the Jewish world always honors the choices made by the Israeli voter and acts in concert with Israel’s democratically elected government. I’m also keenly aware that Israelis are on the front lines, making sacrifices and risking their own lives every day so that Jews worldwide will survive and thrive. I count myself forever in their debt.

But sometimes loyalty requires a friend to speak out and express an inconvenient truth. And the truth is that the specter of a one-state solution and the growing rift between Israel and the diaspora are endangering the future of the country I love so dearly.

We are at a crossroads. The choices that Israel makes in the coming years will determine the destiny of our one and only Jewish state — and the continued unity of our cherished people.

We must change course. We must push for a two-state solution and find common ground among ourselves so that we can ensure the success of our beloved nation.