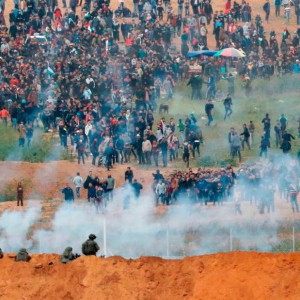 “Yesterday marked the one-week anniversary of the ongoing “Great March of Return” which affirms the right of return for Palestinian refugees. However, despite the fact that the protestors were unarmed, Israeli forces deliberately targeted Palestinians with sniper fire, live ammunition, tear gas, and rubber-coated steel bullets.

At least 27 Palestinians in Gaza have been killed, including sixteen-year-old Husain Madi and photo-journalist Yaser Murtaja, and more than 2,500 have been injured across the occupied Palestinian territory.

We strongly condemn Israel’s deliberate and violent attacks against unarmed Palestinian protestors, and we urge all members of the international community to form an independent commission of inquiry to investigate Israel’s murder of Palestinian demonstrators and its continued violations of international law and international humanitarian law.

With a sense of shock and outrage, we also condemn the U.S. for preventing the UN Security Council from adopting a statement demanding that Israel respect international law and the right of Palestinian civilians to demonstrate peacefully. Despite the support of other members of the Security Council, the U.S. compounded its culpability by blocking the statement for the second time this week.  Efforts by members of the White House and American administration, primarily U.S. Ambassador to the UN Nikki Haley, to safeguard Israel’s lawlessness and criminal behavior are further cause for alarm, and it is time for other members of the international community to take a moral stand and provide protection for the Palestinian people and hold Israel to account for its crimes.

Furthermore, we honor the courageous journalists in Palestine and abroad who have worked to present the Palestinian human narrative and report on Israel’s recent campaign of war crimes as the Palestinian people strive to achieve self-determination and freedom peacefully.  In direct contravention of Article 19 of the Universal Declaration of Human Rights that calls for the protection of the fundamental rights of freedom of expression and freedom of the press, these violations against journalists and members of the press are part of Israel’s policies that deliberately target journalists and media institutions in Palestine. International law pertaining to the safety of journalists must be respected, and Israel must be held accountable in order to ensure it will refrain from employing such illegal policies.”