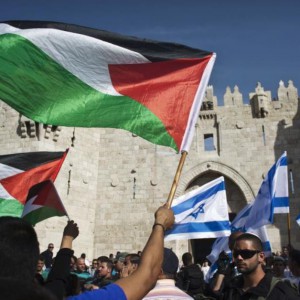 The 30th of January 2018 will mark the third annual Solidarity Day for Palestinians in Israel.
There are approximately 1.8 million Palestinian people living in Israel. Like their fellow Palestinians in Gaza, the West Bank and the diaspora, these Palestinians suffer from a system of Israeli oppression and injustice, although their oppression takes a somewhat different form.

The inequalities between Palestinian and Jewish citizens of Israel have been deliberately created and perpetuated through a system of Israeli government policy—with more than 50 Israeli laws directly and indirectly discriminating against Palestinians in Israel.
One such law grants the Israeli government the right to strip Palestinians of their Israeli citizenship should they demonstrate “disloyalty” or a “breach of trust”. These ill-defined terms have proven to include the exercise of basic political rights, such as the right to protest.

Poverty and unemployment rates for Palestinian citizens of Israel remain significantly higher than their Jewish counterparts, particularly for women. This results from the lack of equal-opportunity legislation (for example, public expenditure per child in Arab local authorities is 52.1% lower than in Jewish local authorities) and structural barriers that exclude Palestinians from the workforce (such as Israeli military service as a necessary condition for employment).

These poor socio-economic conditions are also tied to the unequal access to land. Since 1948, the Israeli government has established approximately 600 Jewish municipalities, but zero new Palestinian villages, towns or cities. Constituting over 20% of the total population, Palestinians in Israel own just 3-3.5% of the total land, as compared to 48% in 1948. As much as 93% of all land in Israel is now under direct control of the state or the Jewish National Fund, barring Palestinians from purchase.

These measures are in blatant violation of the fundamental human rights of Palestinians, as well as international law and conventions. They reveal the dark side of the supposedly democratic state of Israel.