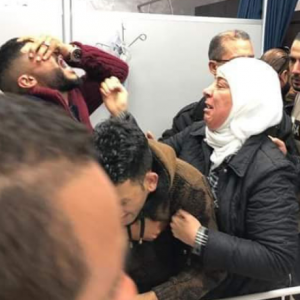 On Saturday afternoon, armed Israeli settlers killed Hamdi Naasan and wounded at least 30 others during their raid on al-Mughayir village, east of Ramallah in the occupied West Bank. PLO Executive Committee Member Dr. Hanan Ashrawi issued the following statement on behalf of the PLO regarding this terror attack:

“On behalf of the the PLO, I condemn in the strongest terms the heinous murder of 38-year-old Hamdi Nassan and the injury of 30 other Palestinian civilians at the hands of Israeli-settler militias. Under the protection of Israeli forces, these militias raided al-Mughayir village near Ramallah on Saturday, terrorizing the defenseless residents and wreaking havoc in the isolated village.

The political climate in Israel negates Palestinian rights and expresses racism against the Palestinian people. As such, the marked escalation of terror attacks by armed groups of Israeli settlers against Palestinian civilians is a natural outcome of the culture of hate and atmosphere of incitement and violence against Palestinians that this extremist Israeli government espouses and promotes.

The Palestinian leadership holds the Israeli government wholly responsible for this heinous crime. Governments that actively support this colonial regime and shield it from accountability also bear moral and criminal liability for the crimes committed by Israeli forces and settlers, who commit murder with impunity. Equally, states that choose to remain silent against this terror campaign must understand that in these times of injustice, silence is complicity.

We grieve along with Hamdi Nassan’s bereaved wife and four children. Thirty other al-Mughayir residents are receiving medical treatment for their injuries. We wish them a speedy and full recovery.”