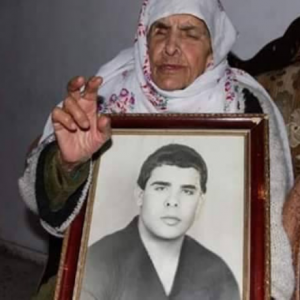 On Wednesday 6 February, Faris Baroud died from health complications brought on by prolonged and deliberate medical negligence on the part of Israeli prison authorities. The 51-year-old Gaza resident had been incarcerated in Israeli prisons for 28 years, during which he endured long periods of solitary confinement and systematic medical negligence, while also being denied family visits for the past eighteen years. On his untimely death, PLO Executive Committee Member Dr. Hanan Ashrawi issued the following statement:

“The Israeli government is fully responsible for the untimely death of Faris Baroud and the inhumane treatment he was subjected to for nearly three decades. Baroud and others were among thousands of Palestinian political prisoners Israel had pledged to release after the signing of the Declaration of Principles. It reneged on that promise the same way it reneged again on the promise to release these prisoners in 2014.

Israel is a serial violator of both human rights and its obligations under international humanitarian law, as evidenced by its use of torture and other inhumane treatments, as well as medical negligence. It is high time for Israel’s brutality against Palestinian prisoners, illegally imprisoned inside Israeli territory, to be thoroughly and independently investigated.

Faris Baroud’s physical and mental health had deteriorated over the years because of his imprisonment conditions. There are many other Palestinians imprisoned by Israel who are facing serious threats to their lives due to medical negligence, including prisoners suffering from chronic illnesses. This grave situation requires immediate attention from all High Contracting Parties to the Fourth Geneva Convention, who have a legal and moral obligation to end Israel’s policy of mass incarceration and its persistent human rights violations of Palestinian political prisoners.

In this context, the Palestinian leadership calls on relevant international organizations to intervene and to conduct a thorough investigation. The Israeli government must be placed under full scrutiny and held accountable for its repeated violations of international law, including international humanitarian law.”