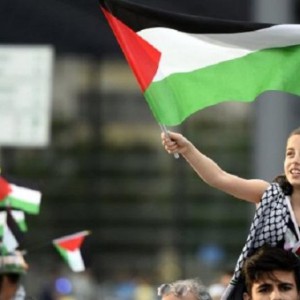 On this anniversary we remember that Israel’s ethnic cleansing began at least seventy-one years ago, and that it continues to this day. In East Jerusalem we see the systematic cancellation of residency permits, which is reducing the Palestinian population. We see Israel’s policy of ‘Judaization’: changing Palestinian names to Hebrew ones, starving Palestinian neighbourhoods of everyday services, and slowly strangling them by denying their residents building permits and cutting off their access to Jerusalem. All this is accompanied by the demolition of Palestinian homes, and the forcible expulsion – often to make way for Jewish settlers – of those whose ownership goes back generations.

Where there is no land to steal or expel us from, Israel tries to deny our existence and steal our identity, our history and our culture…our very being.

And yet despite Israel’s best efforts, here we are today – Palestinian and proud! We are growing our communities and we are asserting our identity.

The Nakba was a tragedy. But it was also a failure. Instead of the erasure which Israel attempted, we’ve refused to be forgotten, and, slowly but surely, we’re recovering our rights. 1948 saw Palestine disappear from the map, and 1967 brought the occupation. But through all of this, we’ve kept our struggle alive – the struggle for the right to determine our future in our own land.

Palestine is now a state, and yes, many challenges do remain. The occupation remains. The development of the structures, institutions and economy of a state continues. Our sovereignty has yet to be secured. There is a lot to be done.

But Palestine is a state recognised by 138 countries, and it is asserting its rights as a state in the international arena so as to guarantee its future independence and the rights of its people. These rights cannot, and will not, be taken away.

In 1948, when Palestine disappeared from the map, there were those who thought that was the end. Israel, for one, liked to think it was the end of Palestine, but how wrong they were.

We’ve seen the gradual return of Palestine: first to the map, then as a state, and now as an actor in the international arena.

The Nakba marks all our lives and it remains with us. It will remain with us until Israel acknowledges its violence and the injustice that Palestinian people have suffered and continue to suffer. In 1948 the Nakba handed us a future of loss, emptiness, and defeat. As Palestinian people, we’ve taken that loss and turned it into success, achievement, a State, and a place in the world.