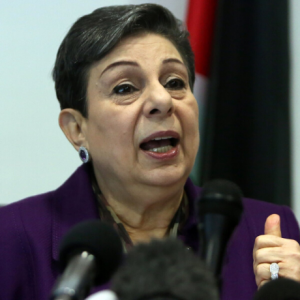 "The Palestinian leadership welcomes important statements made by many states and regional organizations, including the European Union, Russia, China, France, Germany, Belgium, Spain, Ireland, Italy, and Norway rejecting Israeli plans for the annexation of Palestinian territory as illegal and unacceptable. These statements reflect a global and principled commitment to the standing and universal application of international law, which strictly prohibits annexation. They also reiterate commitment and support for the inalienable rights of the Palestinian people to freedom, sovereignty, and peace, as enshrined in the United Nations Charter and relevant United Nations resolutions, including 2334 (2016), 242 (1967) and 338 (1973) among many others.

The Palestinian people and leadership appreciate these positions, which are firmly anchored in our shared values and vision for a future of peace, security, and cooperation that our generations need and deserve. Regrettably, such positive commitment to the two-state formula is offset by strategic and highly destructive Israeli steps that have made annexation a rolling and continuous reality on the ground that remains unchallenged in any practical measure.

Israeli actions are unraveling the practicability and applicability of the two-state formula. They are etching a future of perpetual conflict and suffering while also threatening the core and relevance of international law to global peace and security. Israel is drawing maps, grabbing land, expanding settlements, and undermining the viability of the Palestinian state at the financial, political, and practical levels. It is taking willful steps to bankrupt the Palestinian government and financially extort the Palestinian leadership. Israel is also exploiting the blind ideological support it has in the White House to quickly reach the point of no return. At the same time, it is relishing the international community’s continued reluctance to act preemptively and decisively. This has to change.

Immediate corrective measures are required to confront unilateralism, annexation, and land grab and save the prospects and requirements of peace. It is time for preemptive and concrete measures that can change the dangerous dynamics on the ground and restore the relevance and effectiveness of accountability and international responsibility, as they are detailed in international and European laws. It is time to defend the Palestinian people’s inalienable rights and to protect them from this ferocious and malicious campaign of political and financial assault through increased support and holding Israel accountable.

The only positive way forward is through multilateral, proactive, and effective actions that refocus efforts and discourse on international law and the rights and obligations it enshrines. States need to individually and collectively honor their domestic laws and international obligations in relation to human rights violations, annexation, and other illegal actions Israel is undertaking.

The international community can and should leverage its collective influence to chart a new and credible multilateral political, legal, and financial approach that stops Israel’s illegal and toxic actions from condemning the region to perpetual conflict. Such a powerful collective intervention, firmly anchored in the principles and values of international law, would create the needed conditions to create the future of peace, security, and cooperation that we all seek. Do not withhold action and the ability to influence events until Israel deals the final, fatal blow to the chance of peace. The future of the region hangs in the balance."