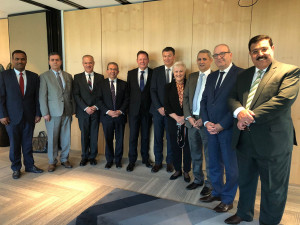 On May 25, Ambassador Abdulhadi participated in a Round Table discussion on the Middle East at the New Zealand High Commission in Canberra.

The meeting was attended by Mr Rob Taylor, Deputy Secretary and Mr Stuart Horne, Director of the Middle East Division at Ministry for Foreign Affairs and Trade, in addition to a group of Arab Ambassadors.

Ambassador Abdulhadi provided a comprehensive analysis of the recent Israeli aggression on Gaza Strip and Jerusalem and explained the root causes of the current crises. Also, he thanked the New Zealand government for its long-standing support of the Palestinian cause and their recent principled position on the current crises.

Mr Taylor and Mr Horne reiterated the New Zealand position on the current crises especially their support of a just two-state solution according to International Law and UN resolutions. The Arab Ambassadors also reiterated their support for the Palestinian people in these difficult times and urged the New Zealand government to recognize the State of Palestine to in order to save the two-state solution.