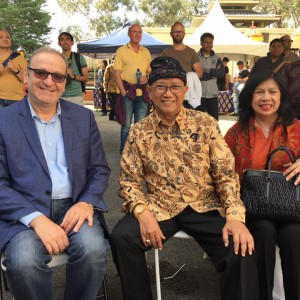 Ambassador Abdulhadi attended the Festival Indonesia 2016, which was held at the Indonesian Embassy in Canberra.

The festival showcased the diversity of Indonesian culture, cuisine, art, traditional dance, and also included a guided tour of the Indonesian Cultural Center located in the Embassy compound.

Ambassador Abdulhadi took this opportunity to further strengthen the relationship between Palestine and Indonesia, highlighting their shared commitment to appreciating diversity and multiculturalism.