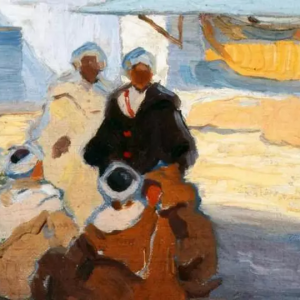 On Thursday 15th March, Ambassador Abdulhadi attended the book launch for 'Hilda Rix Nicholas and Elsie Rix’s Moroccan Idyll' at the Moroccan Embassy in Canberra. The event was kindly hosted by Moroccan Ambassador Karim Medrek and presented by the book’s author Professor Jeanette Hoorn. The book offers a fascinating insight into the early twentieth-century experiences of sisters Hilda and Elsie in the cosmopolitan North African city of Tangier. Hilda’s exquisite Moroccan oil paintings are a prominent feature of the book and the sisters’ collection of letters and postcards to their mother contextualizes the artwork while also offering absorbing anecdotes that detail the people, culture and landscapes of a unique corner of the post-War Orient.

In addition to the Palestinian Ambassador, the launch was attended by other members of the International and Arab Diplomatic Corps as well as a good number of intellectuals, academics and art and literature enthusiasts.

At the conclusion of the evening’s event, Professor Hoorn signed copies of the books for the attendees.