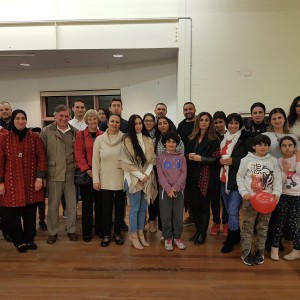 The Palestinian community in Canberra organized an Iftar dinner on Sunday 20 May. It was an opportunity to also observe the 70-year anniversary of the Palestinian Nakba where more than 800,000 Palestinians were expelled from their homeland and more than 550 villages were demolished.

Counsellor Suheir Gedeon represented the Palestinian Embassy at the Iftar and delivered a speech in which she highlighted the meaning and spiritual significance of Ramadan as a month for forgiveness, tolerance, peace and cohesion.

She also observed the Nakba (Catastrophe), highlighting its ongoing consequences, the lessons to be learned from it, and the immutable right of return for Palestinian refugees. She condemned the killing of more than 100 unarmed civilians in Gaza by Israeli soldiers since March 30, and called on the UN to provide international protection for the Palestinian people.

She also criticized the US's decision to move its Embassy to Jerusalem, describing this action as a clear violation of international law and unnecessarily provocative.