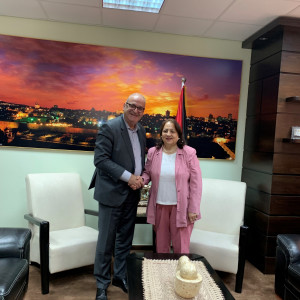 Ambassador Abdulhadi met with the Minister of Health, HE Dr Mai Kaila, in Ramallah during his August visit to discuss the present needs and priorities of the health sector in Palestine. Also raised during their meeting were some areas for potential, health-focused co-operation between Palestine and Australia. Attention was also given to the current international development and capacity building projects that are strengthening the sector in Palestine, particularly those that are being led by Australian NGOs.