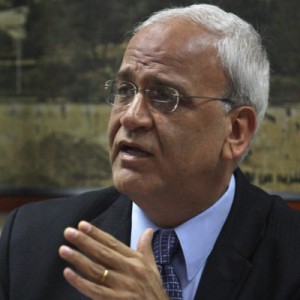 During a press conference this morning, Erekat explained: “Israel has been carrying out organized terrorism and systematic incitement against the people of Palestine, and therefore the current situation should be considered as a natural consequence of decades of occupation, humiliation, oppression and racist policies.”

He started the conference by citing the names and ages of every Palestinian that was killed by Israel since the beginning of the latest aggression. Dr. Erekat described the recent murder of Palestinians on the streets of Jerusalem and elsewhere as: extrajudicial executions, and called upon the international community to assume its responsibilities and to immediately provide protection to the people of Palestine.

He sent a clear message to the Quartet for cancelling its meeting with the Palestinian side upon the request of Mr. Netanyahu, and called upon the Quartet: “to immediately come to Palestine amidst the Israeli attack and assume its responsibilities.” He asked: "If you will not come now, then when?”

Dr. Erekat added: “The occupation has spread a culture of hate and racism that justifies all kinds of atrocities, including collective punishment and cold-blooded executions. It’s the Israeli government that has made clear to the Palestinian people, both in actions and statements that they refuse to end their belligerent occupation and will do everything possible to erode the inalienable rights of the Palestinian people. “

In addition, Dr. Erekat made two announcements regarding the Palestinian diplomatic path to bring justice to the Palestinian people. He noted that: “From one side we are going to contact within the next twenty-four hours the High Commissioner for Human Rights and ask the Special Rapporteur on Extrajudicial Summary or Arbitrary Executions, Mr. Chrystof Heyns, to apply his mandate, applicable to all countries, and conduct a thorough investigation into Israel’s summary executions and murders of the Palestinian people. At the same time we are preparing files with information on the latest executions to be sent to the International Criminal Court.”

Dr. Erekat concluded by saying: “We are now facing a moment of truth. We will continue to ask the United Nations to assume its responsibility for the protection of the Palestinian people and for all the international community to hold Israel accountable for its violations of international law.”