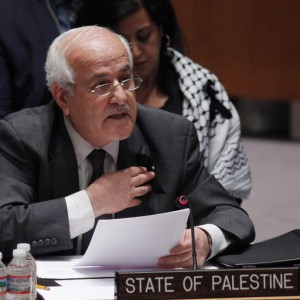 The resolution was put forward by Malaysia, New Zealand, Senegal, and Venezuela and was passed with 14 votes in favour to a resounding round of applause. Significantly, the U.S. abstained from voting, marking an end to years of the U.S. veto being used to block similar resolutions in the Security Council.

Mr. President,
I thank you for convening this important meeting and express the State of Palestine’s sincere appreciation for the principled efforts you’ve exerted in both your national capacity as well as in Spain’s capacity as President of the Security Council for this month.

The Council’s action, while long-overdue, is timely, necessary and important. The resolution adopted reaffirms the Council’s decades-long position that Israeli settlements in the Occupied Palestinian Territory, including East Jerusalem (1) have no legal validity; (2) constitute flagrant breaches under international law, namely the Fourth Geneva Convention, and (3) constitute a major obstacle to peace, gravely diminishing the viability of the two-State solution based on the 4 June 1967 borders and the possibility of realizing it.

We express our appreciation to all the Council Members that have supported this resolution. They have adopted this resolution on behalf of the entire international community, reflecting the longstanding global consensus on the matter. Here, we must also express our gratitude to the four cosponsors – Malaysia, New Zealand, Senegal and Venezuela. They have acted in line with their constant calls for action to redress this unjust situation, firm in their responsibilities as Council members. We also thank Angola among the NAM Caucus members for their abiding support. Of course, we also thank Egypt, the Arab representative on the Council, for all efforts exerted throughout this process.

Mr. President,
Over the years we have made countless appeals to the Council to uphold its Charter duties, convinced in its central role and the primacy of international law, insisting on the need for concerted action to confront Israel’s oppression of the Palestinian people and relentless colonization of our land under its half-century foreign occupation. Our appeals have sought, in the immediate, to alleviate the suffering of our people, a defenseless civilian population denied their rights, dignity and humanity; but our appeals have also been calls for the Council to contribute to the cause of peace for the long-term – peace for Palestine, peace for Israel, peace for the Middle East region and for our world.

We have not been alone in our appeals; they have been echoed by Security Council Members themselves and by the States, organizations, international civil servants, and civil society that have come before the Council, all imploring the Council to act, including in specific to address the illegality of Israeli settlement activities in Occupied Palestine, including East Jerusalem, and the erosion of the two-State solution based on the 1967 borders and the prospects for a just, lasting and comprehensive peace.

That the Council has finally chosen to act is significant, after years of paralysis, as is the fact that this resolution has been adopted with majority support. But this step requires vigilant follow-up if it is to be meaningful, to stem further deterioration and salvage the two-State solution from relegation to history’s archives. Urgent efforts are needed to reverse the dangerous, negative trends on the ground and to advance our collective efforts to end to the Israeli occupation that began in 1967 and achieve freedom, rights and justice for the Palestinian people, including the Palestine refugees, leading to Palestinian-Israeli peace and security, as well as the goal of Arab-Israeli peace.

Mr. President,
There is no “bashing”, as repeatedly claimed by the Israeli Government – not by Palestine, not by the Council, nor by any who have time and again urged the Council to act in the interest of peace and security. Claims of bashing are beyond offensive, because in reality today’s action may be too little too late. After years of allowing the law to be trampled and the situation to spiral downward, today’s resolution may rightly be seen as a last attempt to preserve the two-State solution and revive the path for peace. For many, this seems virtually implausible at this point as Israel, the occupying Power, has been permitted to entrench its occupation and a one-State reality with absolute impunity, at times even being rewarded for its violations and intransigence.

Against this backdrop, one Council resolution in nearly eight years is not disproportionate; it is shameful. But today’s vote rectifies this record and sets us on a new course.

The facts are that the only bashing being done is by Israel – of this Council and entire UN system, of the Charter and international law. For five decades, despite resolution 242 (1967) calling for Israel’s withdrawal from the territories it occupied in 1967 and all the resolutions thereafter, Israel has persisted full force with its occupation. Its illegal settlements and wall have severely fragmented our land, undermined its contiguity, and isolated East Jerusalem – the heart and capital of our State and de facto Israeli annexation of which the international community has never recognized and continues to reject. It has destroyed convictions in the rationality, feasibility and fairness of the two-State solution, as reflected in the growing negative sentiments among Palestinians, whether those besieged and inhumanely blockaded for nearly a decade in the Gaza Strip, or those enduring the colonization onslaught and daily settler terror in the West Bank, including East Jerusalem, or those in the Diaspora, including in our refugee camps across the region, whose patience in awaiting justice and a peaceful solution is legendary, yet now so frail.

To the audacious claims of bias, we say that the only bias taking place is that against the law, against reason, and against the vision of two States as the most viable solution to this prolonged, illegal occupation and disastrous, tragic conflict. We have heard it loud and clear in the gleeful boasts by some Israeli officials that “the two-State solution is dead” and “there will be no Palestinian State”. We witness it in the constant Israeli schemes, including Knesset ploys attempting to pervert the law to accommodate the unlawful, and the pretexts used to expropriate and colonize our land and deepen the occupation. We witness it in Israel’s blatant contempt of the global demands to comply with its obligations under the law, as is expected of every single other State in the international community, and to finally commit to the path of peace. But today, this Council has said: enough.

Mr. President,
This resolution represents a necessary step for addressing one of the most critical aspects of the longest issue on the UN agenda, a 70-year open wound, precluding peace and stability in our region, with far-reaching consequences, not least of which is fueling the anger and despair that injustice breeds, especially among youth who see no present or future, and undeniably fueling much of the radicalism and extremism plaguing our region and world.

The Security Council must stand firm by this decision, stand by the law and stand on the right side of history. It should not be cowed by negative threats or spin; the Council is doing the right thing. We hope this global call for cessation of Israeli settlement activities and violations will serve to compel compliance with the law, de-escalate tensions, bring an end to the violence, including all acts of terror, provocations and incitement, and reverse the negative trends on the ground. This is vital for salvaging the prospects for peace.

Led by responsible action by the Council, including follow-up of the reports requested of the Secretary-General on the resolution’s implementation, we hope that the coming period will be one of serious effort to set the course for a credible political horizon and help the parties advance towards a peaceful solution. Here we recognize fully the Arab States’ efforts in the context of the Arab Peace Initiative, which remains a cornerstone for peace, as well as the efforts of France, the Quartet, Egypt and the Russian Federation, and hope that these collective efforts, with international support, will come to fulfillment.

We remain firm in our belief that peace – the central purpose of this organization – is more than worthy of both international legislation and action. We thus urge intensification of international and regional efforts to achieve, without delay, an end to the Israeli occupation that began in 1967 and a comprehensive, just and lasting peace, based on the relevant UN resolutions, Madrid terms of reference, including the principle of land for peace, Arab Peace Initiative and Quartet Roadmap, whereby the Palestinian people will realize their rights and justice, including a just solution for the Palestine refugees on the basis of resolution 194 (III), and can finally live in freedom and dignity, exercising their inalienable right to self-determination in their independent, sovereign and contiguous State of Palestine, with East Jerusalem as its capital, living side by side with Israel in peace and within secure and recognized borders.

I thank you, Mr. President