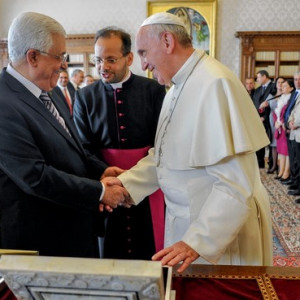 We discussed the importance of the implementation of our comprehensive bilateral agreement. This treaty goes beyond the formal recognition of the State of Palestine on the 1967 borders: It ratifies our commitment to the freedom of worship and our support for the work of the churches in Palestine, the Holy Land.

We met at a moment of great expectation. Tomorrow, over 70 countries will meet in Paris in order to discuss how to bring peace to our region, the holy land. We praise the role of President Hollande and the French government in organizing this international conference, and we call upon the participants to take concrete measures in order to implement international law and UN resolutions. It is long overdue for the Palestinian people to exercise their basic right to live in freedom and dignity.

We also discussed the issue of Jerusalem, a final status issue for negotiations. East Jerusalem, occupied by Israel since 1967, is the capital of the State of Palestine. We reaffirmed the importance of the city for the three monotheistic religions, and our support for Jerusalem being an open city. This was the essence of Jerusalem for centuries. This is the identity of the city that we want to preserve for a just peace to prevail.

On the other side, the Israeli government continues its policies aimed at turning Jerusalem into an exclusive Jewish/Israeli city, demolishing Palestinian homes, expanding illegal settlements, building an illegal Annexation Wall, dividing families and isolating our occupied capital from the rest of Palestine.

Any attempts at legitimizing the illegal Israeli annexation of the city will destroy the prospects of any political process, bury the hopes for a two-state solution, and fuel extremism in our region, as well as worldwide.

In this moment, we extend our hand to President elect Trump for his cooperation to make peace based on international law.