Formal bilateral relations between Palestine and Vanuatu began in 1989 and have been conducted more recently through the General Delegation of Palestine to Australia, New Zealand and the Pacific (GDOP).

In 2013 Palestinian Ambassador to Australia, New Zealand and the Pacific Izzat Abdulhadi presented his credentials to the President of Vanuatu Mr Lolu Abil. Whilst in Vanuatu, Ambassador Abdulhadi also met with other members of the Vanuatu leadership, including Prime Minister Moana Carcasses Kalosil and Foreign Minister Edward Natapei. Discussions between the parties focussed on the Israeli-Palestinian conflict and the establishment of a sovereign Palestinian state.

Despite recognising the State of Palestine, Vanuatu chose to abstain from voting on the United Nations General Assembly (UNGA) Resolution that upgraded the status of Palestine to a Non-Member Observer State in 2012. Also, in recent years, Vanuatu have generally abstained from UNGA Resolutions that assert the applicability of the Fourth Geneva Convention to Occupied Palestinian Territories (OPT) (Table 5) and those that condemn the continued construction of Israeli settlements in OPT (Table 6). This is a divergence from Vanuatu’s past patterns of generally voting in favour of these resolutions. Palestine and Vanuatu continue to discuss the most effective strategy for developing bilateral and multilateral relations.

There are great opportunities for cooperation between Palestine and Vanuatu; including technical exchanges in the medical and agricultural sectors, promoting tourism between the two nations, and encouraging private sector investment. Palestine and Vanuatu hope to grasp these opportunities in the future and continue working together to attain mutually beneficial outcomes. 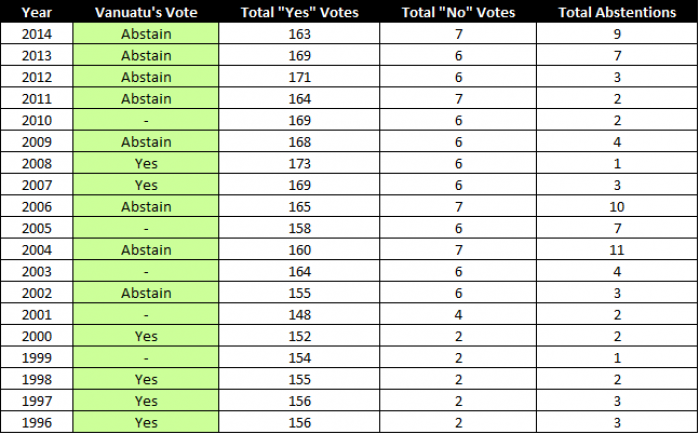 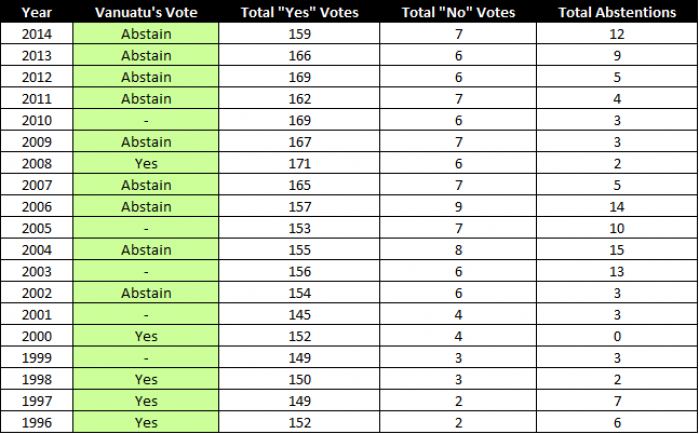