The relationship between Australia and Palestine has greatly improved over years of diplomatic engagement and dialogue.  Various pathways have been taken by both nations to foster this strong relationship. The Palestinian Foreign Minister Riad Malki visited Australia in 2015, where he offered a warm invitation to Australian Minister for Foreign Affairs Julie Bishop to make a reciprocal trip to Palestine. Many Australian MPs and Senators have visited Palestine; including former Prime Ministers Kevin Rudd and Julia Gillard, Opposition Leader Bill Shorten and, more recently, Minister for Defence Industry Christopher Pyne. Trips to Palestine have also been facilitated by the Australian Parliamentary Friends of Palestine, a group of MPs dedicated to the Palestinian cause. Australia has continued to show its strong commitment to the well-being of Palestinians, offering comprehensive aid packages and consistently ratifying United Nations General Assembly (UNGA) Resolutions to provide humanitarian assistance to Palestinian refugees. Australia also showed its support by abstaining from the UNGA Resolution that upgraded the status of Palestine to a Non-Member Observer State in 2012.

Consecutive Australian governments have supported a two-state solution to the Israeli-Palestinian conflict. This involves separate Israeli and Palestinian states living side by side within recognised and secure borders. Also, Australian governments have reiterated their strong belief that Israeli settlements in the Occupied Palestinian Territories (OPT) are counter-productive and an obstacle to the peace process. Although various new challenges have arisen, Palestine remains committed to working alongside Australia to overcome them.

Australian voting patterns on UNGA Resolutions concerning the Israeli-Palestinian conflict have varied over time. These patterns have often reflected the political views of the particular governing party. For example, the most recent Labor governments voted in favour of UNGA Resolutions that assert the applicability of the Fourth Geneva Convention to OPT (Table 1) and those that condemn the continued construction of Israeli settlements in OPT (Table 2). Also, Labor government statements between 2007-2013 often described these Israeli settlements as “counter-productive” and “undermining”. During his time as Minister for Foreign Affairs, Bob Carr advanced this point by declaring that all Israeli settlements on the West Bank are illegal.

The Liberal-National Coalition government elected in 2013 opposed some of the previous governments’ views on the Palestinian question. Their position was manifest in Australia’s decision to abstain from voting on UNGA Resolutions regarding Israeli settlements in OPT (Table 2) and the applicability of the Fourth Geneva Convention to OPT (Table 1). The government has justified these decisions by maintaining their support for an independent Palestinian state within the context of a two-state solution to the conflict. They have reiterated their preference for bilateral negotiations between Israel and Palestine, over multilateral diplomacy, as a means to achieve this goal. Minister for Foreign Affairs Julie Bishop has stated that Australia maintains its support for United Nations Security Council (UNSC) Resolutions 242 and 338. Palestine is determined to overcome the challenges of foreign policy by working hand-in-hand and engaging strategically with Australia to clarify issues and come to mutually beneficial agreements.

Since these polls were conducted, Australian support for the Palestinian people has grown even greater. This was demonstrated by the thousands of Australian fans who cheered on the Palestine national football team at the 2015 Asian Cup, hosted by Australia. The Palestinian team engaged widely with the Australian community and were, to their surprise, afforded extensive media coverage. Although they didn’t manage to make it through the group stage of the competition, they were indescribably proud to play with the support of Australians and Palestinians alike. 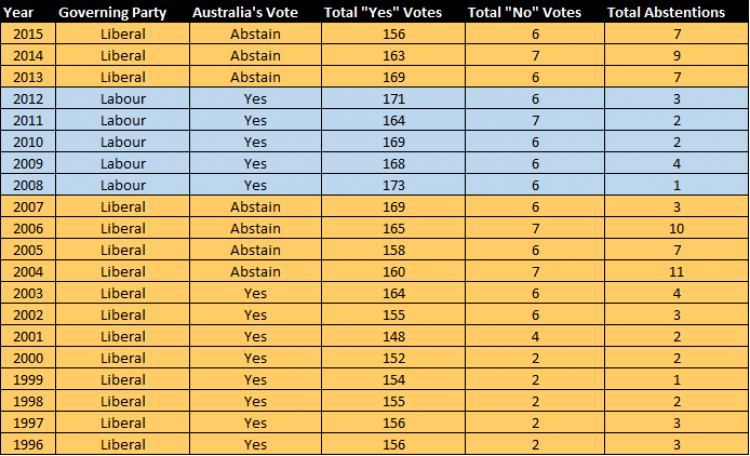 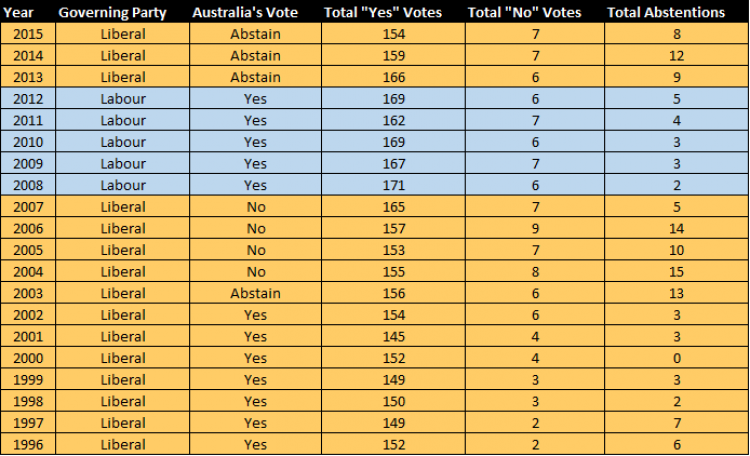