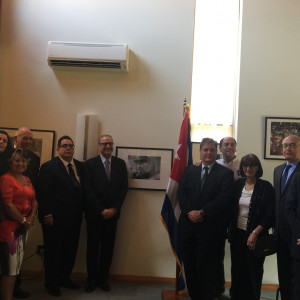 Ambassador Abdulhadi extended his deepest condolences of passing away of the leader of the the cuban people; Fidel Castro in a gathering of his memory  organized at the Cuban Embassy on December 2/2016.

In his condolences speech at the Cuban Embassy, Ambassador Abdulhadi has reflected on the profound and genuine relationship between Cuba, under the leadership of Castro, and Palestine and the continuos support of Cuba to end the Israeli occupation and the establishment of independent and sovereign Palestinian state.

"Cuba under the leadership of Castro has supported the establishment of PLO in 1964, received the late Yasser Arafat in 1973 and was the first to recognize the state of Palestine in 1973 and broke its relations with Israel:, added the Palestinian Ambassador.

Ambassador Abdulahdi, has, also, recognized and  appreciated the immense humanitarian and developmental support of Cuba to the Palestinian people under the leadership of Castro.

May his soul rest in peace.