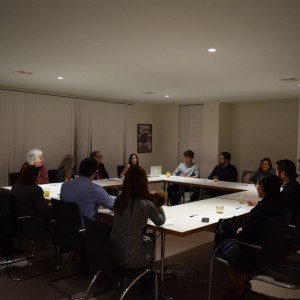 A Q & A session was held on September 28th at the Palestinian Embassy in Canberra to discuss key issues of the Israel-Palestine conflict. The session was attended by the Embassy staff, Jewish students, and members of the wider Jewish community in Canberra.

This session forms a part of a research project that is currently being conducted by the Embassy, investigating the various political views of the Jewish community in Canberra.

During the session, key issues of the Israel-Palestine conflict were discussed, including the vision and strategy of the Palestinian leadership, the Israeli position towards Palestinian self-determination and statehood, the final status issues (including Israeli settlements), the educational curricula in both Israel and Palestine, the necessity for both sides to recognise each other, the Palestinian elections, and democratic transition in Palestine.

It was a highly informative session and the participants agreed to meet again and expand the meeting to include Australian-Palestinian youth from Canberra. This will facilitate a fruitful and constructive dialogue between the Palestinian and Jewish communities in Australia.