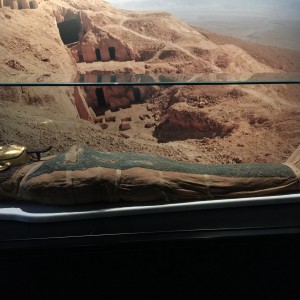 On December 8, Ambassador Izzat Abdulhadi attended and participated in the launch of  the Egyptian Mummies: “Exploring Ancient Lives” at the Powerhouse Museum in Sydney.

The attendees Came face-to-face with six ancient Egyptian mummies and used the latest technology to go beyond the wrappings and discovered what lies beneath in this world premiere exhibition at the Powerhouse Museum, Sydney.

Six mummies selected from the British Museum collection who lived and died in Egypt between 1800 and 3000 years ago will be on display alongside their 3D CT scan visualizations that unlock hidden secrets of mummification and provide a unique insight into the everyday lives of ancient Egyptians.

The Museum president of Trustees and the Director delivered speeches highlighting the significance of these Mummies in the ancient civilization of Egypt.

The Egyptian Ambassador warmly welcomed the viewers, the participating Arab Ambassadors and other representatives from the International diplomatic Corps. It was a marvelous and wonderful exhibition.