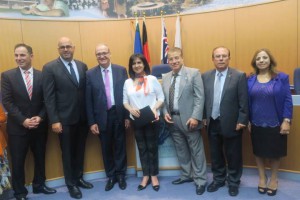 The Embassy of the State of Palestine was proud to take part in a number of events held with the Mayor of Bethlehem, Ms. Vera Baboun, in Sydney and Canberra in early May 2016.

Vera Baboun was elected Mayor of Bethlehem on October 2012, becoming the first female Mayor of the city since its inception.

Mayor Baboun visited Australia in early May as a part of DFAT's Special Visitors Program. The Embassy of the State of Palestine was privileged to take part in a number of events organised with the Mayor in Canberra and in Sydney. Including a reception held in her honor at the Ambassador's residence, a Mothers Day celebration at the Australian Palestinian Club and a number of events in the municipality of Marrickville.