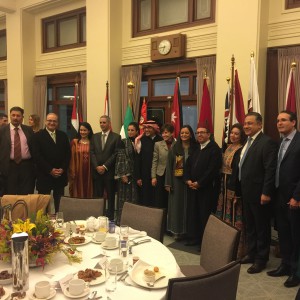 The Council of Arab Ambassadors in Canberra has organized a multicultural and multi faith Iftar dinner in Canberra at the Old Parliament House on June 20.

Ms Julie Bishop, the Minister of Foreign Affairs was the "Guest of Houner" and delivered a speech highlighting the growing relations between Australia and the Arab World and effective participation of Australia in  countering terrorism in Iraq and syria. Ms Bishop condemned all forms and acts of terrorism including the latest terrorist attack against Muslim prayers in London. She also indicated that those who acts terrorist attacks in the name of Islam do not represent the great values of Islam.

The Dean of the Council of Arab Ambassadors also addressed the audience thanking Asutraia for its multicultural society and Fair GO principal and acknowledged the role of the  Arab and Muslim communities in Australia in the development and prosperity of Australia.

The function has been attended by Governmental officials,  the members of the International Diplomatic Corp, civil society representatives, religious and  community leaders, among others.

It is worth mentioning that this was the first time the Council of Arab Ambassadors, collectively, organized such Iftar dinner which has been greatly appreciated by all attendees.