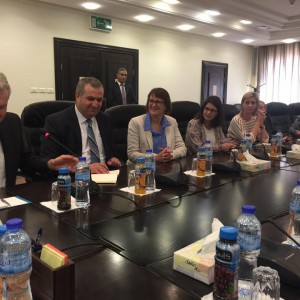 A high caliber Australian Labor Party delegation completed a trip to Palestine earlier this month. The trip was organized by the Australia Palestine Advocacy Network (APAN).

As part of their visit, the delegation met with Palestinian Prime Minister HE Dr Rami Hamdallah, who gave them a detailed analysis of the current situation in Palestine, including the illegal Israeli settlement expansion, the reconciliation process between Fateh and Hamas, and explained to them why Australia should recognise the State of Palestine.

The delegation also met with members of the Palestinian Legislative Council, with whom they discussed issues such as illegal Israeli settlements and Palestinian prisoners.

The delegation went on many field visits and met with a wide spectrum of civil society organisations and UN agencies.

The members of the delegation reported the trip as being extremely insightful, promising to speak out in Australia about the Israeli violations of Palestinian human rights that they witnessed.