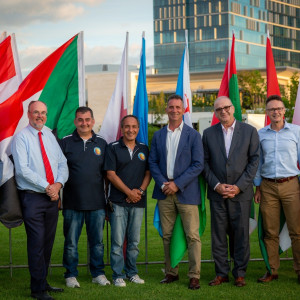 Upon an invitation by Australia Arab Association, Ambassador Abdulhadi conducted a successful visit to Perth/West Australia during the period from, June 29 to July 3.

He attended and participated actively in the Eid El Fitr Festival which has been organized by the Australia Arab Association in partnership with the Palestinian Community in WA. Ambassador Abdulhadi has delivered a speech where he highlighted the importance of the work of the  Arab and Palestinian community and praised Australia for its unique multiculturalism, cohesion and tolerance.

The Palestinian Community exhibited and shown in this Festival different aspects of the Palestinian culture and heritage including Embroideries, handcrafts, traditional industries, traditional food, among others. The Festival also included a performance of Palestinian traditional dancing (Dabka) which has inspired the audience who has expressed their admiration of this wonderful and marvelous dancing.

The Ambassador has met with WA official including the Minister for Tourism, small businesses, and multiculturalism and discussed with him a possible developmental cooperation between WA government and Palestine. He also met with Many WA MPs and discussed with them the possibility and feasibility of establishing a Parliamentary Friends of Palestine and the importance of Australia to recognize the State of Palestine.

It was very successful visit with a warm welcoming and hospitality form the Australia Arab Association and the Palestinian community.