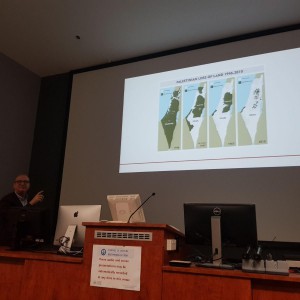 Upon invitation by the Middle Eastern Culture Society, Ambassador Abdulhadi delivered a lecture to students of the Australian National University.

Ambassador Abdulhadi spoke about the modern history of Palestine, including the Nakba, the Six-Day war, the formation of the Palestine Liberation Organisation and the Oslo Peace Process. He then discussed the current Palestinian strategy, in light of this history.

The lecture was well attended by students and staff, with Ambassador Abdulhadi also engaging with students informally at the post-lecture reception.