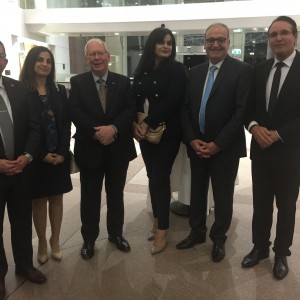 The Department of Foreign Affairs and Trade (DFAT) has organized a reception to celebrate Ramadan at its premises on June 19.

The reception has been attended by the Muslim and Arab diplomatic missions, DFAT's staff and other Governmental officials.

Ms Frances Adamson, Secretary of (DFAT) delivered a welcoming speech highlighting the significance of Ramadan and its importance in promoting tolerance harmony and coexistence.

Mr Nabil Lakhal, the Dean of the Council of Arab Ambassadors, also, deliverded a speech highlighting the values of Islam and its message of mercy and unity.

It is worth mentioning that this is the first time that DFAT organized such a function to observe the month of Ramadan which was highly appreciated by the Arab and Muslim Diplomatic missions.