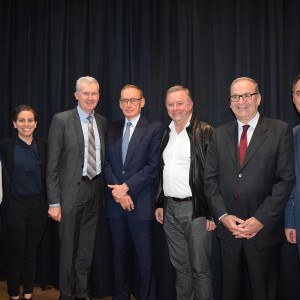 A Policy Forum on Palestine has been conducted in sydney yesterday, June 27 and sponsored by the NSW labour Party.

Bob Carr was the main speaker and delivered an excellent speech highlighting the urgency to end the Israeli occupation and achieve the Palestinian self determination in a sovereign and independent state within 1967 borders. He reiterated  the labour party position that Israeli settlements are illegal by International law and Fourth Geneva convention.

According to Mr Carr, the continuation of the Israeli occupation is deeply  poisoning the Israeli society, violating the human rights of he Palestinian people and increase their suffering. He indicated that the continuation of Israeli occupation and the current settlement activities  will definitely lead to a apartheid system in the Palestine similar to the apartheid system in South Africa.

In this regard, he called on the Australian government to directly recognize the State of Palestine as an investment in comprehensive and durable peace in the region.

He, also, called on the forthcoming NSW ALP conference to a adopt a clear resolution to recognize the State of Palestine to save the two state solution, avoid Israeli Apartheid system and provide hope to the Palestinian people.