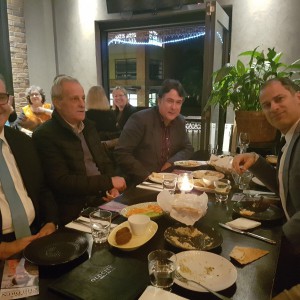 Ambassador Abdulhadi attended a fundraising dinner organized in Sydney to support the Gaza Surf Project, who aim to train Gazan youth in surfing and hope to create a surfing center in the future.

Ambassador Abdulhadi highlighted in his speech the importance and significance of community development projects in effective advocacy and its role in raising the awareness of the Australian people of the plight of the Palestinian people in Gaza, who have been subjected to the unjust and brutal Israeli siege for the past 10 years.

Ambassador Abdulhadi spoke about the divide between Gaza and West Bank and highlighted the importance of reconciliation for the Palestinian cause and the achievement of Palestinian rights.

He thanked the solidarity and advocacy groups for their continuous support and their constant efforts to advocate on behalf of the Palestinian people.