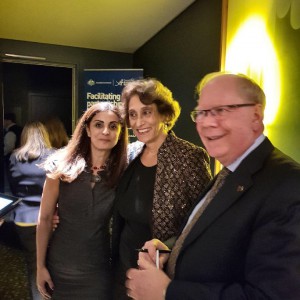 Embassy staff had the pleasure of welcoming Ms Suad Amiry to the embassy premises, as part of her visit to Australia for the Palestinian Film Festival.

Ms Amiry is a highly distinguished Palestinian writer and architect. Between 1991 and 1993 she was a member of a Palestinian peace delegation in Washington, D.C. and has been engaged in other major peace initiatives.

She is also the Founder of the Riwaq Centre for Architectural Conservation—an NGO dedicated to preserving Palestinian collective memory through restoration of architectural heritage sites in rural Palestine. Riwaq was awarded the prestigious Aga Khan Award for Architecture in 2013m the Curry Stone Design Prize in 2012, the Prince Claus Award in 2011, and the Qattan Distinction Award in 2007.

Embassy staff also attended the Palestinian Film Festival screening of 'Stitching Palestine' - a documentary film of twelve Palestinian women talking of their life before the Diaspora, their memories, lives and identity; all connected by the enduring thread of embroidery.

Ms Amiry, as one of the twelve women interviewed in the film, spoke before and after the film.

The Palestinian Film Festival was support by the Council of Australian-Arab Relations.