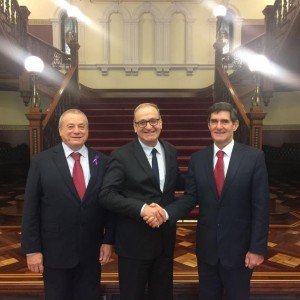 Ambassador Abdulhadi and Embassy staff made a trip to Brisbane over three days. A number of productive and enjoyable activities were conducted over the trip:

Ambassador Abdulhadi attended the Queensland Intercultural Society Ramadan Iftar in the Parliament of Queensland. The event was widely attended by Members of Parliament, religious leaders from a variety of religions, federal and state police officers, NGO leaders, as well as prominent members of a variety of community groups. The event included a wide-ranging program that included excellent speeches by prominent guests such as President of the Australia Palestine Advocacy Network , Bishop George Browning, a performance by a school choir, and an award ceremony for outstanding contributions to multiculturalism in Queensland.

A number of meetings were also conducted with members of Palestinian community and advocacy groups based in Brisbane, including Palestinian Arts, Culture and Sports Inc. (PACSI) and Justice for Palestine. These meetings were both engaging and enjoyable, with tangible outcomes and aspirational plans for the future.