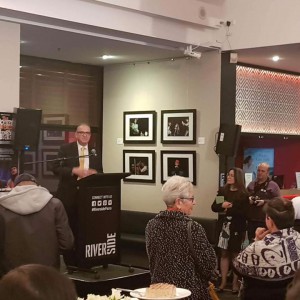 Ambassador Abdulhadi and Embassy staff attended a a wonderful theatre production entitled "Where the Streets Had a Name", based on the novel by renowned Palestinian-Egyptian-Australian author Randa Abdel-Fattah, adapted to theatre and directed by Eva di Cesare.

The play tells the story of a young Palestinian girl who sneaks into Jerusalem to bring to her ailing grandmother a handful of soil from her beloved hometown. It details the many challenges that her and her friend face along the way due to the occupation. The story highlights the trauma that Palestinian children face due to the Israeli occupation and also how, as with other oppressed groups, the 'personal is political' for Palestinians.

The play was performed to a packed-out theatre and was greeted with enthusiastic applause. During the reception after the play, speeches were delivered by Randa Abdel-Fattah, Eva di Cesare and Ambassador Abdulhadi.