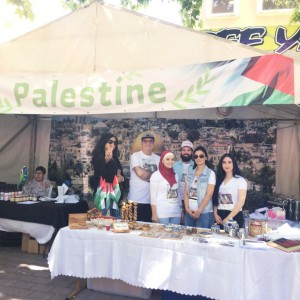 On Saturday, 16 February, the Palestinian Delegation in co-operation with Palestine Fair Trade Australia ran a stall at the annual National Multicultural Festival in Canberra’s city centre.

Ambassador Abdulhadi, the Delegation’s staff and some generous Palestinian community members ensured that the Palestine stall was attractive and engaging. Various ceramics, olive-wood handicrafts, glassware, soaps, olive oils, embroideries and textiles were on display and available for purchase. Visitors were also treated to some samples of traditional Palestinian food. The Delegation’s half of the stall featured an ‘I love Jerusalem’ theme which showcased the holy city’s historical and cultural significance and its Palestinian patrimony through both a photo exhibition and giveaway posters, t-shirts, postcards and factsheets.

The participation once again of Palestine Fair Trade Australia was highly valued, allowing festival-goers to take a piece of Palestine home with them and, at the same time, support Palestinian producers and artisans via the Fair Trade initiative.