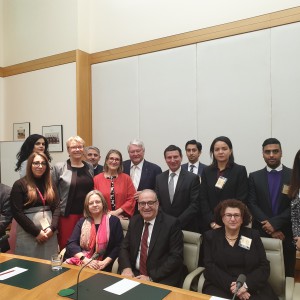 On Tuesday, 30 July, the Palestinian Delegation welcomed Dr Sanaa Alsarghali, Assistant Professor of constitutional law at an-Najah University in Palestine. Dr Alsarghali delivered a lecture later that day at Parliament House on the constitution-building process in Palestine. To an audience of federal MPs and senators, political staffers and diplomats, she outlined the role and importance of constitutional principles as Palestine navigates a course towards statehood and democracy. She argues that all Palestinians should both be aware of their national rights and duties, and feel empowered to contribute to and own their constitutional document. Dr Alsarghali, who is the first female with a PhD in constitutional law in Palestine, is currently at Melbourne University as a visiting fellow until mid-August.