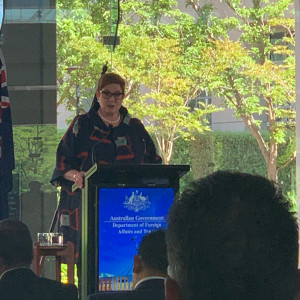 Ambassador Abdulhadi has been invited to participate in a function organised by DFAT entitled: Australia’s work in the Indo-Pacific, an address by Australia’s Foreign Minister & Minister for Women, Senator the Hon Marise Payne.

In this function, Senator Marise Payne delivered a speech in which she mentioned the various diplomatic engagements and initiatives of Australia in the Indo-Pacific region. In her speech, she also mentioned that middle power countries play and continue to play a significant role in peace and security in the region in addition to economic recovery after COVID19. At the end of her speech, she thanked the diplomatic corps for their resilience during COVID19 and wished them all a Merry Christmas and Happy New Year.