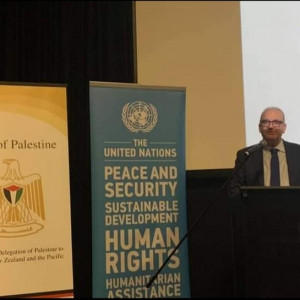 The General Delegation of Palestine, in coordination with the United Nations Information Centre, and the Council of Arab Ambassadors hosted an event to commemorate the United Nations Day of Solidarity with the Palestinian People on 29th November 2020, in Canberra.
The event began with a reception at ANU’s Badger and Co., followed by speeches by Ms Louise Aubin, Regional Representative of the United Nations High Commissioner for Refugees and Acting Director of United Nations Information Centre in Canberra, H.E. Ali Kraishan Ambassador of the Hashemite Kingdom of Jordan and Dean of the Council of Arab Ambassadors, and H.E. Izzat Abdulhadi Ambassador of the State of Palestine.
It also included the screening of the film: “1948: Creation and Catastrophe”. Through the personal recollections of Palestinians and Israelis, this film accurately recounted the events of 1948 and provided a first-hand account of the creation of a state and the expulsion of a nation. Overall, the event was a great success.
2/44 Dalman Crescent
O'Malley ACT 2606
Australia
PO Box 4646
Kingston ACT 2604
Australia
+61(0)262869193
+61(0)262869405
gro.voglap@noitageleD.nainitselaP
gro.voglap@ralusnoC
Mon-Fri 9:00am to 4:00pm
Facebook
Instagram
Twitter
Newsletter