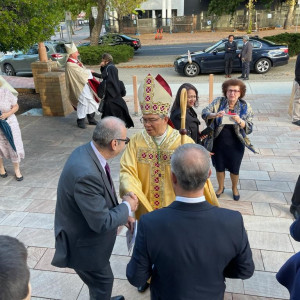 On March 19, Ambassador Abdulhadi participated in the celebration of the Eighth Anniversary of the Pontificate of His Holiness Pope Francis conducted in Canberra.

In his speech, H.E. the Ambassador of the Holy See referred to the occasion and highlighted the solidarity and sympathy of His Holiness Pope Francis towards vulnerable people and his denouncement of all kinds of injustices and human rights abuses in the world. In particular, the Vatican Ambassador referred to the Pope's recent visit to Iraq to demonstrate empathy for the Iraqi people in these difficult times.

The ceremony was attended by members of the diplomatic Corp, MPs and local community members.